The inspiring story of Dr Gregory, Out of the Forest, is now released through Penguin Publishing.

You can order a copy of the book through Penguin or see available dates and venues that Dr Gregory will be speaking about and signing copies of his book in towns around Australia.

Beetles, worms and lizards — Gregory Smith ate just about anything to stay alive in the forest. From a homeless hermit to a university lecturer, he’s proven you can overcome anything in your search for a safe place.

Dr Gregory’s story lay dormant for many years until a chance offer to appear on ABC Radio’s ‘Conversations with Richard Fidler‘.

This Conversation is also available on CD

A Collection Of Conversations With Richard Fidler : Volume 3

Out of the woods  – ABC’s Australian Story

From a homeless alcoholic living in the wild to academic success and a book deal, Out of the Woods tells the inspiring comeback story of forest-dweller Gregory Smith.

When he left school at 14, dogged by the crushing assessment that he was “functioning at the lower level of the dull range”, Gregory Smith had already endured a violent upbringing and months in an orphanage after the break-up of his family.

At 35, struggling with a lifetime of trauma, he opted to escape into the wild with no desire to return to the society that had failed him so dismally.

Exhausted by years of living off the land and sleeping rough, Gregory emerged from the forest ready to change his life, and gained an undergraduate degree and then a PhD at Southern Cross University.

His story offers hope for the most damaged amongst us. “Gregory represents the capacity for transformation against all odds and a real triumph over adversity,” says one of his students, Kerry Pritchard. “How to take the crap in life and grow beautiful things out of it.”

The homeless hermit who came out of the wild 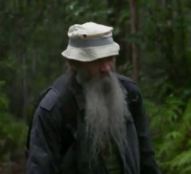 By the time he was 15, Gregory was in and out of juvenile justice centres. He was told he had a low IQ and a state psychiatrist diagnosed him as “a personality disordered adolescent, sociopathic type”.

The life-story of the man who staggered out of the rainforest.

The extraordinary life story of Gregory Smith, a homeless man who lived as a hermit in a NSW rainforest for 10 years, has been told with the help of a local scribe.

Former Ulladulla Times columnist Craig Henderson was asked to co-write Smith’s memoir, Out Of The Forest, after the remarkable tale first came to public attention on ABC Radio.

Smith – who eventually staggered out of the North Coast forest close to death – has remade his life, earned a PhD and lectures in sociology at Southern Cross University.

“The publishers had struggled to find the right writer for the project,” Henderson said, who lives in Narrawallee, on the NSW south coast.

“But when I first met Gregory we hit it right off.”

Henderson spent six months interviewing Smith and researching his life, and admits to being “blown away” as the incredible details slowly emerged.

“His existence was so chaotic, so traumatic, so beset by violence and crazy misadventure that you’d have struggled to make it up,” Henderson said.

Coffs Harbour – From forest to academe 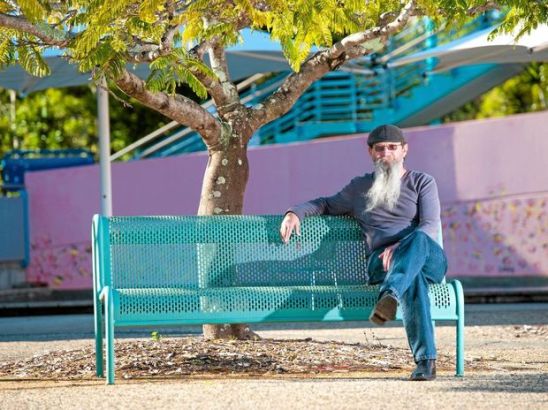 WHEN asked how he found the forest, Dr Gregory P. Smith told Richard Fidler on Conversations last week, “the forest found him.”

The forest felt more comfortable than another “vulnerable” night in the park as a homeless person, he said

The Guardian – After 25 years of being homeless, I learnt there is one simple thing you can do to help.

‘There are as many pathways to homelessness as there are homeless people in the world. For some, it’s a sudden freefall triggered by a lost job, a broken home life or some other seismic personal upheaval. For others the road to sleeping rough winds down a slow, steady and depressing gradient until it arrives – quite literally – at rock bottom. Tragically, some are even born into it. Many have mental illness to contend with.’

‘On a day of dark clouds, Gregory Peel Smith took his pack and walked out of Mullumbimby, climbed a mountain, hit a dirt road and wondered what was at the end of it. He was a homeless alcoholic, a trauma survivor who knew nobody, had nothing to do and nowhere to go, so he kept walking.’

‘The road ended in a rainforest that lived up to its name. “It rained a lot and I was trying to protect myself all night,” he says. “When the sun came up, it was such a beautiful morning in a misty, magical place. I was one of the hobbits, before hobbits were discovered.’ 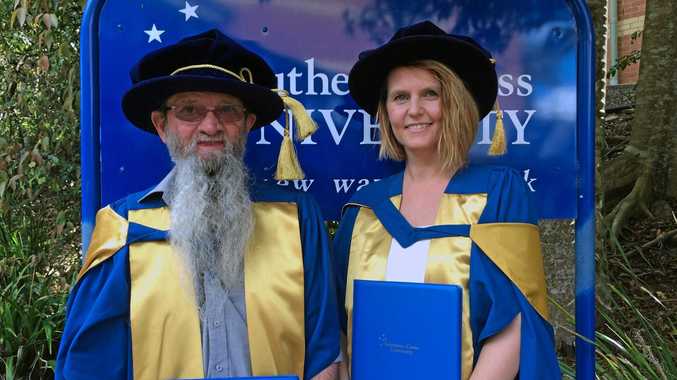 ONE OF the country’s “Forgotten Australians” has graduated as a Doctor of Philosophy in Lismore, after surviving institutional child abuse in the sixties and a decade of homelessness.

Dr Gregory Smith, who has testified for the ongoing Australian Royal Commission into Institutional Responses to Child Sexual Abuse, spent 10 years as a hermit in the bush before realising the benefits of a decent education.

“I didn’t understand the dream when I was a boy, I was too busy surviving,” he said in his gown and mortarboard as he held his newly awarded doctorate degree outside the Whitebrook Theatre at the Southern Cross University in Lismore.

“When I was in the forest I was afraid,” he said.

Dr Smith’s study, “Nobody’s Children: An exploration into a sense of belonging of adults who experienced institutional out of home care as children”, examined the experiences and needs of 21 “Forgotten Australians”.

“Hopefully (my study) will resonate with the broader public to shed light on the background of homeless people today,”

GREGORY Smith was a homeless man sitting on a park bench beside a building site in Tweed Heads when he had an epiphany.

He suddenly saw that his future could be a different landscape from his past.

A man who lived in a forest for 10 years will visit Altona next week to speak about his uplifting memoir released on Monday.

Out of the Forest by Gregory P. Smith details his harrowing childhood, bizarre experiences living on the fringes of society and his road to becoming a university academic.

Growing up, Smith said his father was a violent alcoholic while his mother wasn’t maternal.

As a child, he and his four sisters were left at an orphanage for two years before their parents returned for them.

He left school at 14 and was in and out of detention.

Wandering Australia’s east coast, he struggled with drug addiction, alcoholism and mental health before deciding about 1990 to retreat into the forest just outside Mullumbimby, north of Byron Bay.

Smith said he was forced to leave the forest only because he was close to death.

“I was very sick, I was going into psychosis,” he said. “My diet consisted of marijuana buds and creek-brewed beer.

“I became a vegetarian in the forest because one of the things I did notice was that every time I ate a little marsupial or little critter, it disappeared; it wasn’t there anymore. So, I was eating my friends.

It has been a long journey for author Gregory P. Smith. It includes being raised in an orphanage to living homeless on the streets and battling drug addiction, going off the grid in the jungle for ten years and finally attending to university, first as student and now as a lecturer.

Instead they were taken to an orphanage in Armidale, where they remained for the next two years until reclaimed by their parents. While there, like others in care, Gregory was the victim of physical, psychological and sexual abuse – now known as Forgotten Australians.

GREGORY Smith had a childhood filled with violence, abuse and confusion.

His father was a violent alcoholic and his mother was hardly the maternal type.

As children, Smith and his four sisters were taken to an orphanage in Armidale, NSW where they remained for the next two years until reclaimed by their parents.

While there, Smith was the victim of physical, psychological and sexual abuse.

On his return to Tamworth, he had problems fitting in at school and when he turned 15, he was sent to a juvenile detention centre.

He spent years wandering the east coast of Australia, fluctuated between employment and homelessness.

He married twice and had a daughter but it wasn’t enough to pull him out of his drug addiction, alcoholism and battle with mental health.

In about 1990 Smith decided to give it all up and retreated into the forest just north of Byron Bay, living in the wilderness and foraging for food.

When he emerged 10 years later, emaciated and close to death, he decided it was time to turn his life around.

I have no idea what the words say, I do like that my image is larger than Putin and Trump.

The interview where it all began! Conversations with Richard Fidler, ABC Radio

As part of the 2017 book launch tour for Out of the Forest, Dr Gregory has featured in countless radio interviews throughout Australia, including Triple M, ABC Sydney Breakfast show with Wendy Harmer, 6PR  in WA, Light FM and many more.

Man of the Forest: 42: Life, The Universe & Everything

Australian Story episode ‘Out of the Woods’

What people are saying about the book Out of the Forest

‘The most remarkable story I’ve ever heard’  Richard Fidler 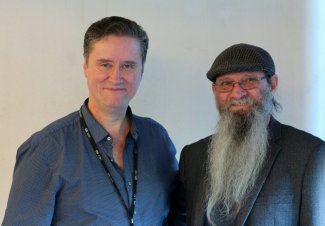 I read a lot of memoirs this year. I didn’t go looking for them; they seemed to find me. Particularly books about the entrapment of family trauma. Like Tara Westover’s widely acclaimed Educated (Hutchinson). But you don’t have to be born into a gun-toting hillbilly sect to experience the poverty and claustrophobia of life in a closed system.

Gregory P. Smith’s Out of the Forest (Heinemann), a hard-won story of neglect, family violence, institutionalisation and homelessness, makes that painfully clear. Both these books are about escape and survival – also about the transformative acts of kindness that seed liberation, and resilience.

Gregory’s memoir, ‘Out of the Forest’, is a powerful story, told with humour and frankness. It had me laughing at times, but crying more often. It recounts a remarkable life journey of resilience, triumph over adversity and, above all, of hope.

Gregory, thank you for sharing your story and congratulations on this wonderful memoir. I have no doubt it will assist and inspire others; its telling will make a difference”.

This is a video I did for Vetx, an organisation concerned with the high rates of vetinarian suicide in Australia.